Go to... Overview The Solution

ITV is an integrated producer broadcaster, operating the largest commercial family of channels in the UK. As well as operating from six international locations, their main production base, The London Television Centre, is situated in Waterloo, Central London.

In the past Cinos have delivered a number of successful installations for ITV. Whether a simple or sophisticated project we ensured we provided the right solution, within budget with an exceptional attention to detail and service support. With this existing and trusted relationship in place ITV chose Cinos to deliver the project safe in the knowledge an excellent service would be provided.

Looking to update your display technology?

Get in touch with our team. We would be happy to discuss your display requirements.
Click Here

Cinos undertook a phased approach for this project. The first phase involved decommissioning NEC V801 80” displays and a number of ceiling speakers from the fifth floor. The subsequent phase focussed on consolidating this technology into three meeting rooms located on the second floor of the London Television Centre.

The second floor meeting rooms would predominately be used for internal meetings and company presentations. When required two of these rooms can be combined into one meeting space; catering for larger group sessions. Cinos reinstalled the 80” NEC displays and provided HDMI connectivity to the table top; allowing staff to share HD content from their laptops. This functionality enables staff to collaborate in a single room environment as well as on multiple documents when the room is combined into one meeting space.

ITV requested that another of the NEC displays was reinstalled in the third meeting room. The third meeting area was constructed using glass partitions which required the installation of a twin pole floor-to-ceiling solution in order to mount the NEC display. Staff can connect their laptops via the HDMI connection as well as play video through the DVD player housed in the room credenza.

In addition, to allow presenters to effectively engage with their audience, Cinos installed a Samson microphone mixer in the third room. Connected to four ceiling speakers, this voice reinforcement system enables presenters to adjust their microphone volume; ensuring they can be heard clearly by all users in the room.

The consolidation of ITV’s existing audio visual equipment into three rooms on the second floor has provided a more effective platform for internal meetings and presentations. By reutilising existing equipment, Cinos have ensured that ITV’s significant technology investment is protected whilst enabling staff to more efficiently use the meeting room resources. 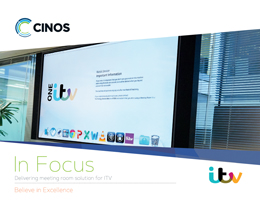 To get in touch with our team please fill out the enquiry form and a relevant team member will get back to you.

If your enquiry is urgent please contact your regional office:

or If it is a support issue please email the support team directly on:

Email us here
Call us here

To get in touch with our team please call the relevant regional office.