Go to... The Requirement The Solution The Benefits The Technology

Our blue-light, public sector client is responsible for law enforcement in a major UK city. They extensively use public surveillance video as part of their duty to maintain public safety.

Our client carried out a comprehensive programme to modernise its command, control, communication and information systems. Part of this programme involved consolidating more than 30 monitoring facilities into three new centres. In addition, their main command and control room at their headquarters was replaced by installations at the new centres.

With access to over thousands of CCTV feeds, our client needed to simultaneously display numerous video images as well as data and graphical information. A variety of audiences required access to the images including senior police officers, 999 dispatchers, other emergency services and our clients’ own operational support staff. Each group operated from different environments; ranging from cavernous operation rooms and command rooms to large monitoring suites.

As part of the modernisation programme, Cinos were asked to install display solutions in a range of different areas across the three new centres. The new displays had to integrate with existing video matrices and a new command and control system. 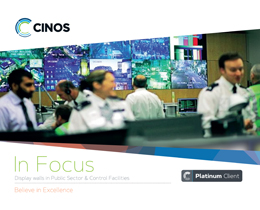 The largest wall of this type was installed at the North Centre and featured twenty-four displays, arranged in a 12×2 layout. The wall stretches over fourteen metres wide and nearly four metres high which ensured visibility was not an issue in such a large room. In the South Centre, four Mitsubishi walls were installed, including three in the Special Operations Room, thought to be the largest control room in Europe.

During operations, overall responsibility falls upon senior officers located in the Command Suite which consists of four rooms; Gold and Silver command rooms and two additional tactical operation rooms. In these smaller rooms, Cinos installed display walls compromising of Eyevis 46” LCD panels in varying layouts depending on the room size. These displays are less than 20cm deep, making them perfect for smaller spaces.

The technical hub of each Centre is the CCTV Monitoring Suite; a separate area in which a team of support staff have access to incoming video feeds from helicopters, street cameras and mobile cameras. In the South Centre, one hundred 19” LCD screens were installed; split between two display walls; one a 2×40 horseshoe layout and the other a 2×10 straight configuration. In the North Centre, sixty-four 19” displays are installed in a 16×4 layout. These walls were built to suit the size and space available.

The display walls can be controlled locally or centrally from the CCTV Monitoring Suites. Control equipment is located centrally and integrated with an advanced KVM system which allows any display wall to be controlled from any operator position on site. At both sites, the display walls are located some distance away from the central video matrix, with signal extension technology used to transport video and control signals over structured cabling.

Do you have a video wall requirement?