Go to... The Requirement The Solution The Benefits The Technology

After six months of project planning British Airways have formally opened its new-look Crisis Management Centre (CMC). The CMC is activated by the Network Operations Control Centre in the event of an incident or major disruption such as aircraft accidents, terrorist incidents or operational disruption. The CMC also offers a first class training facility where employees can hone their crisis management skills. 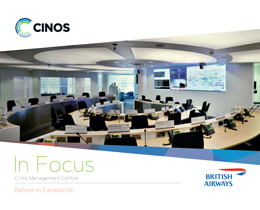 British Airways released a request for proposal to provide a complete technology refresh of their Crisis Management Centre, associated meeting rooms and break out areas. The requirement stemmed from ageing technology and a lack of digital integration at the CMC.

The original core video matrix switching infrastructure was entirely analogue based, primarily using RGBHV signals which was appropriate technology for the time. Standalone monitors without video wall functionality were utilised for crisis situations.

Video connectivity was a key focus for British Airways. They wanted to ensure that visitors and colleagues alike could connect to the system, irrespective of the devices they were using. Therefore Cinos were required to cater for analogue and digital technologies as well as the ability to transmit video sources wirelessly.

In addition, simple and intuitive touch screen control was of paramount importance to British Airways. They required the ability to transmit all video sources to and from the three main control centres to any of the associated meeting rooms or break out areas. 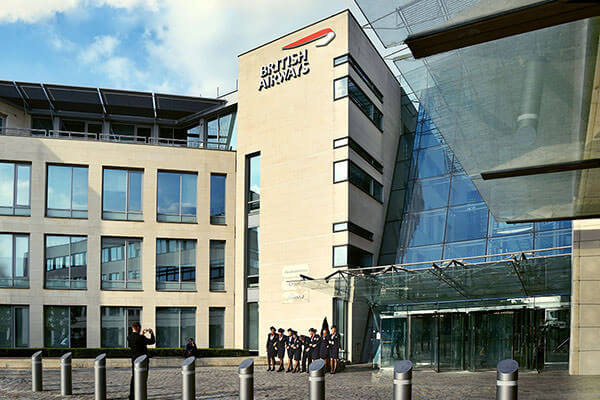 Cinos have redefined the Crisis Management Centre by deploying a fully integrated matrix system designed to meet any of the ranging demands from British Airways.

The solution is made up of two of the largest digital matrix switchers that are available from AMX. With the ability to route up to 128 inputs or outputs British Airways can display a wide range of content from various sources including IPTV, document cameras, CCTV, PC’s and video conferencing. The system is run as a single network; enabling all sources to interact with each other inside the AMX code.

A range of AMX touch panels were deployed to provide users with control of the system. The AMX Modero X Panoramic touch panels have been utilised in the 3 main command and control areas. These panels boast a 20” panoramic display; the largest provided from AMX. They allow users to easily access the wide range of controls available and perform multiple functions simultaneously whilst remaining elegantly unobtrusive.

Working together, the Cinos Marketing Department and our AMX ACE Programmers coded the touch panels to ensure all customer requirements were achieved within an exceptional design. This design has been rolled out across all meeting rooms and command areas to ensure the user is familiar with the system regardless of their location within the CMC.

From the touch panels British Airways have control of the whole system. Users can adjust the lighting, audio routing and display power within each room. Each touch panel has pre-set video wall layouts; allowing users to display any configuration of sources based on their specific requirements. Video and audio conferencing can be utilised via the touch panels, allowing users to connect with recipients without needing the software installed on their laptop or mobile devices. The Cinos engineering team provided British Airways with two user levels – Basic and Admin. This allows the administrator to change source names and configure video wall pre-set levels as their requirements evolve.

A Raritan DKX3-232 32 Port Keyboard Video Mouse (KVM) IP switch was installed enabling the routing and control of the rack mounted British Airways PCs. The video signals from the PCs are fed directly into central AMX Digital Matrix Switches enabling distribution to any of the video walls / repeater displays throughout the facility.

In total the Crisis Management Centre boasts four 4×2 video walls. Situated in the command and control rooms, the video walls allow users to share content from a variety of sources for further analysis and collaboration. Within the main Crisis Chamber the Cinos engineering team deployed a video wall solution into an existing curved wall, repla